Killian Student Corresponds with the President 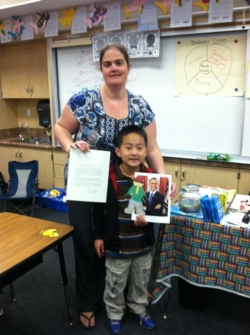 Killian Student Andrew Cao receives a letter from President Obama!
As a culminating Social Studies project 2nd Grade Teacher, Ms. Smith's class read Flat Stanley, which is about a little boy who gets flattened by a bulletin board. Due to him being flat his family mails him in an envelope to visit his friend in California. After reading the story she asked each of her students to bring in an address of someone in their family they wanted to send their Flat Stanley too. Her student, Andrew Cao decided that he wanted to send it to President Obama. "I told him that I couldn’t guarantee it would come back but he wanted to do it anyway", Smith stated. President Obama did send Stanley back and he included some wonderful pictures and a letter. The letter addressed all of the fun and exciting things that Stanley did with the President. It also stated how important it was for students to go to school and get an education. When she told Andrew that his Stanley came back he was so excited. "Andrew and I are truly grateful that the President took time to send a letter back with Stanley" said Ms. Smith.

The Rowland Unified School District is committed to equal opportunity for all individuals in education and in employment. Rowland Unified prohibits discrimination, harassment, intimidation, and bullying based on actual or perceived age, ancestry, color, disability, ethnicity, gender, gender expression, gender identity, genetic information, immigration status, marital status, medical information, national origin, parental status, pregnancy status, race, religion, sex, sexual orientation, or association with a person or a group with one or more of these actual or perceived characteristics. If you believe you, or your student, have been subjected to discrimination, harassment, intimidation, or bullying you should contact your school site principal and/or the District's Chief Compliance and Title IX Officer, Silvia Rivas, by phone at (626)854-8392, by email at srivas@rowlandschools.org, or in person at Rowland Unified School District at 1830 Nogales Street, Rowland Heights, 91748.